As a Canadian motorcyclist, there have been times when I wondered: why did my ancestors ever settle in this country with miserable weather? These thoughts are especially prevalent during the months of November through March when we have snow, sleet, sleet, and all other kinds of precipitation here in my home province of New Brunswick and have mild winters, according to Canadian standards.

For most Canadians, motorcycling is an exercise from early May to mid-October. I usually push further; I often ride until the end of November or even into December, and try to get the bike out every March to start riding the following year. Heated gear is essential for riding during those weeks with temperatures around the freezing point, and this off-season I’ve been working with a useful new kit: a battery-powered heated vest, the ewool PRO+.

ewool is a small Canadian outfit with a small line of battery-powered heated clothing intended for motorcycling or other purposes. The company (see its website here) has been in business for about ten years, and markets its products to the high-end market. They’re priced accordingly, with higher MSRPs than the low-end products you see on Wish and other Chinese retail sites. Prices are also generally higher than American motorcycle-focused brands.

The battery of the ewool vest is slim, the same size as a phablet phone, basically. It stores easily in a storage pocket on the back. Photo: Zac Kurylyk

Much better heating element coverage than some previous heated vests. Note the heating of the lumbar region, which is not available on the cheaper ewool PRO model. It’s a welcome warmer on cold days. Photo: Zac Kurylyk

And the ewool PRO+ heated vest?

When ewool contacted me out of the blue and asked if they could send me a vest to test, the timing was perfect. Fall riding was just beginning. I was about to break out my normal heated gear – an old used hard-wired Venture jacket I bought at the ADVrider flea market a while back, or a battery-powered Heat Demon/Symtec vest I have used for about a decade.

Upon unboxing the ewool PRO+ it was immediately apparent that it was much better quality than the old Heat Demon vest. The fit was also more comfortable, with a high, soft collar that cut the wind chill on my neck, and a generally stretchy, easy fit. Several small touches make it easier to wear and adjust the vest under a motorcycle jacket. The on/off and temperature control switch is located on the lower left hem of the Best, making it much easier to control the jacket without unzipping or removing your riding jacket. As for the battery, it’s in your lower back, where it doesn’t dig into you (some older models carried the battery in a side pocket, which was uncomfortable).

It is very easy to put on the ewool PRO+ and go out for a short trip. This is perhaps the biggest advantage of battery-heated riding gear; instead of the hassle of trying to plug things in and then unplug them every time you get off your machine, this self-contained piece of equipment is much more convenient.

On the road, the vest provided what I would consider Goldilocks level warmth when riding in the late fall and early spring. Paired with a motorcycle jacket and a good jacket liner, the ewool PRO+ emits just enough heat to keep the cold at bay on short to medium rides. ewool’s marketing claims “When maxed out, the ewool PRO+ delivers up to 51W of chest-warming power in just 3 seconds”, and states that this is up to seven times faster than competition vests, with six times the thermal coverage. 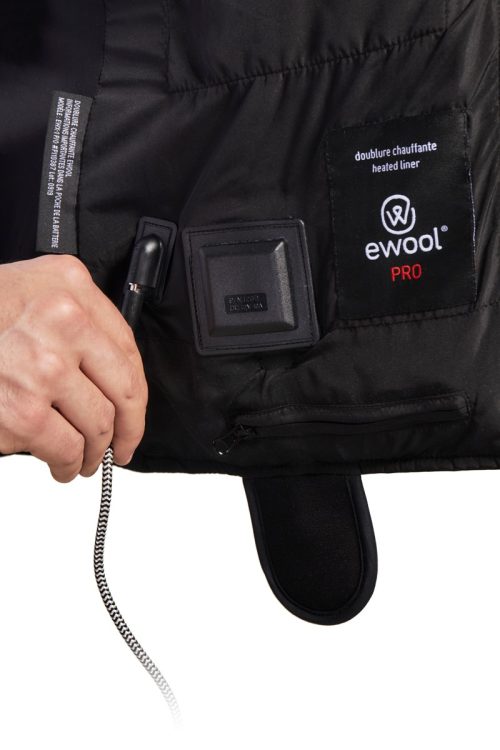 An internal socket allows you to power the vest from your bike’s electrical harness. Photo: ewool 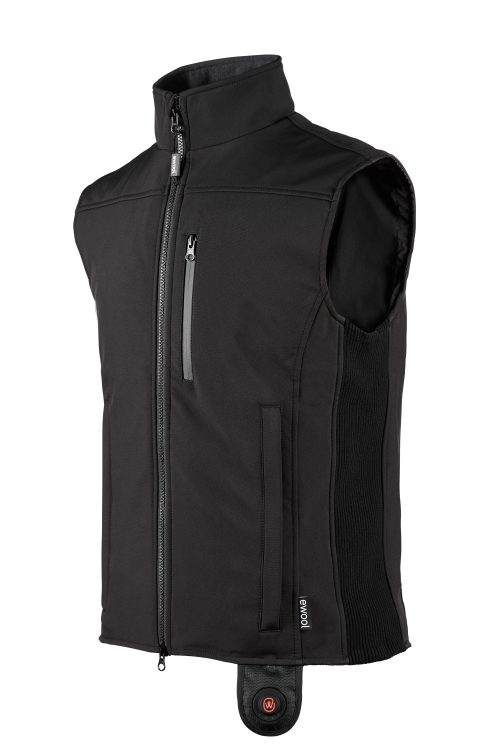 A full jacket will always be warmer than a vest, but the vest fits well under your outer motorcycle jacket, with no binding in the arms and shoulders. Photo: ewool

I don’t have a big stack of battery heated vests to cut out and measure, to test ewool’s claims. I will say that it seemed to heat up much better and heat more evenly than my old battery vest. It didn’t do as good a job as my wired heated jacket, but if you’ve ridden heated gear for any length of time, you know it’s hard to beat the full coverage of a jacket.

Note, however, that unlike other heated gear, the ewool PRO+ can be hardwired to your bike, if desired, as it operates on a 12V system; some other battery equipment runs on 7V and cannot be wired directly to your machine. I just got back from a three day trip to the south coast of Nova Scotia in temperatures between 5 and 10 degrees Celsius, and my chest was very hot with this vest plugged into the bike and left on its setting on higher.

There are two battery sizes available for the vest; I opted for the high capacity battery, which is a $129 option. This battery lasts for 1.75 hours on high heat, 3.5 hours on medium heat, and 7 hours on low heat. After using the vest, I would rate these numbers as fairly accurate.

One more note: I managed to lose this vest last fall when it fell out of my dirt bike backpack on the side of the trail. It took me a few weeks to find it – and during those weeks the vest was sitting by the side of the trail in snow, rain and general bad weather. Once I found it, got it home, and plugged the battery back in, the vest started up and has worked fine ever since. So, I think you can trust the IP67 rating of the heating elements, and generally it looks like it is indeed as good as it looks when you open the box.

That’s the only fault I can find with the ewool PRO+ at this point: it’s expensive. Canadian customers pay $598 plus tax; your cost will be different if you are in the US or the EU, but note that ewool offers free shipping to all of these locations at least (see the vest on the ewool website here for your local price).