Phone holder / The history of Quad Lock and some tests

As my RTW bike sits in a shed at the end of my sister’s garden in England due to pandemic lockdowns in various countries, I find myself in the US waiting for a clearer path to more world travel. Now my phone is my most used navigation device!

Like many of you, I own more than one set of wheels; the others are a high mileage Super Tenere that’s been halfway around the world and a new Honda Trail 125 and a bike (the pandemic, for me like many others, has generated a little body weight gain that needs to shred, hence the bike).

I am a GPS user and an iPhone user. I’ve never really used a phone much for navigation, but now that I’m riding locally I find myself using the phone and cycling more and more. While I’m shredding micro ounces, a motorcycle GPS is a bit of a stretch. I decided to look for an alternative that I could easily use on all three, a little search and it still said Quad Lock… so I jumped in and settled.

My choices were – two motorcycle mounts, the Standard and the Pro 360, I mainly got this for my KTM 500 EXC-F as I wanted a bit more strength than the hard anodized aluminum provides with this build; for now it’s on my CT125. I also added two of the vibration dampers because I’m a little paranoid about my expensive phone being destroyed, and they’re only $20. It’s cheap insurance.

For the bike I have the handlebar stem mount, which is secured with big rubber o-rings, no shock for this as I only ride on pavement. Of course, I also need the phone case for this application.

One of the main reasons I’m buying now and not sooner is the iPhone issue, and how vibration from the bike can affect the OIS (optical image stabilization) inside from the phone and seriously screw up the camera, Quad Lock tells me they fixed this problem.

To clarify more goals… that is not a paid advertisement, just an interest on my part to learn more about the product and the company, then pass the information on to you!

Like some of you maybe, I wondered how this mounting system came about, since it seems like it has been around for so long. Where and how did the original ideas come from? So I contacted the inventors and founders of Quad Lock for answers.

When did the Quad Lock business start?

Quad Lock was launched following a successful Kickstarter campaign in 2012. We’re celebrating our 10th anniversary this year, but it felt like yesterday when we hit the ‘Go Live’ button on our campaign. 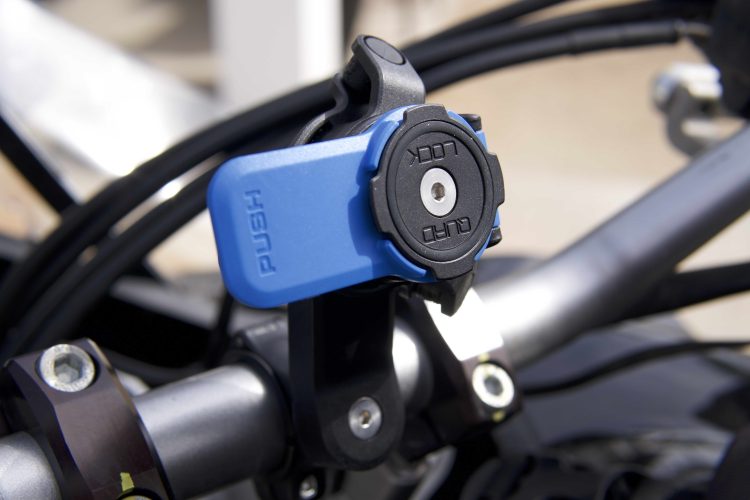 The distinctive original design with the blue “Push” release tab for the locking mechanism. Photo: rtwpaul

How or where does inspiration come from?

The idea of ​​Quad Lock was born out of necessity. We have to go back to 2007 for the beginning of the story. I had moved to Sydney for work and used my bike to get around the city. Steve Jobs had just announced the iPhone to the world and I found a guy who was importing gray market products from the US and managed to buy him one.

At the time, iPhones were only available in the United States. The iPhone was and still is amazing technology. I was using Google Maps (like back then) to navigate around Sydney which was pretty cool. The problem was that every time I took the phone out of my pocket, I was paranoid, I would drop it; iPhone cases hadn’t been invented yet!

So I started looking for a way to mount the phone on the handlebars of my bike. 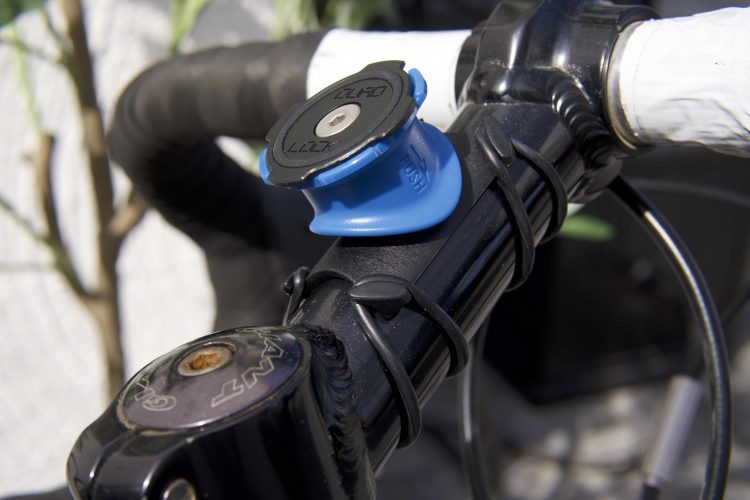 The bike stand is small and simple to hold with two O-rings, another way to mount it is with zip ties. Photo: rtwpaul

After looking everywhere, there was absolutely nothing on the market that I was willing to trust with my new iPhone. As an industrial designer, I started sketching out a few concepts that evolved into very rough concepts. Not having the capital to commercialize the idea, I continued to develop the idea for my use.

Fast forward a few years and no decent solution had appeared on the market. I had evolved my idea into a workable concept and after seeing a few products perform exceptionally well on Kickstarter, myself and my friend Rob Ward, now a business partner, thought we should put it on Kickstarter to see if any other people had an interest in the idea.

What was the initial design for… motorcycle/cycle/atv etc. ?

The original design was for cycling, but over time we saw more and more customers using the product on motorcycles, so Rob tried to market the product to motorcyclists with real success. We have therefore designed mounts specifically for use on motorcycles. 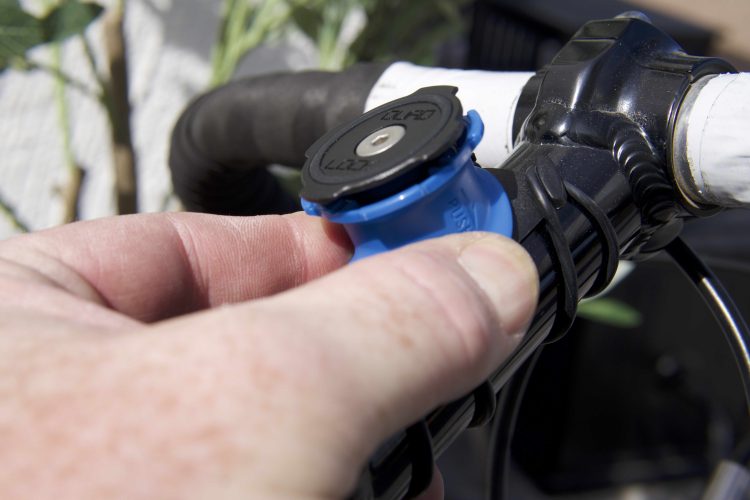 The bike mount uses a drop-down sleeve rather than a tab to release the phone lock. Photo: rtwpaul

Was the design meant to improve on something else you had seen on the market, or a new idea/invention?

It’s hard to come up with something completely new, but the idea of ​​a “case-based” edit was pretty new. The mounting mechanism was influenced by bike computers, but improved to make it more secure, which is a key part of our intellectual property. 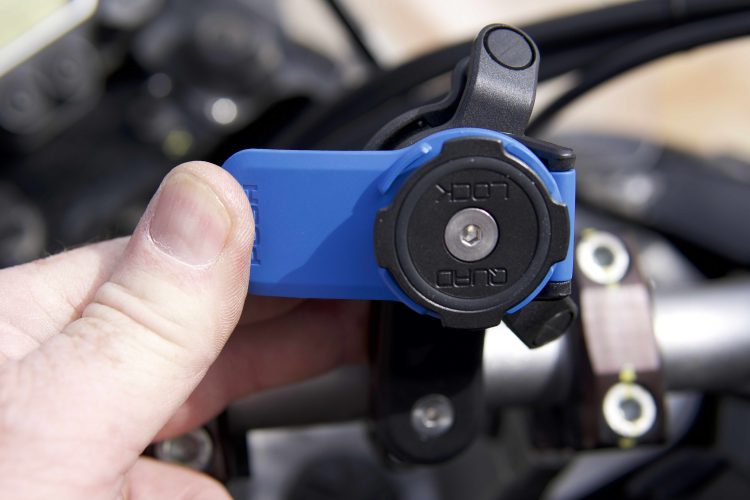 The unlock lock is a simple press down, then twist your phone to remove. Photo: rtwpaul

Where was the product originally released?

When we launched the product on Kickstarter, we were exposed to a global market from day one. The majority of backers were from Australia, but we had customers all over the world, so we had to figure out how to ship products to all corners of the world very early in the business.

Recently, Apple announced that phone mounts on motorcycles could cause problems with camera sensors; were you are you looking to solve this problem before or after their announcement?

The issue of vibration impacted camera sensors has been discussed in the motorcycling community for quite some time now. We first heard about camera issues with the iPhone 6, but they weren’t directly related to vibration. As phone makers introduced more advanced optical image stabilization (OIS), vibration issues started to show up more frequently. Although we only saw a very small number of affected phones, we took the issue very seriously. 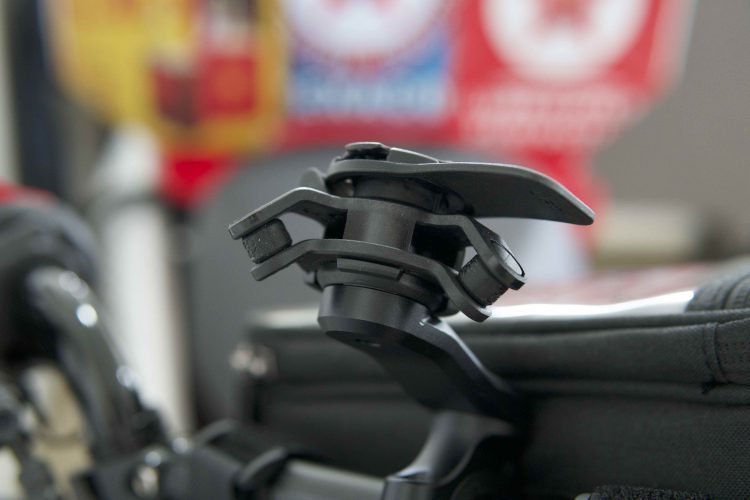 We had to figure out what was causing the damage. So our design team worked tirelessly to determine the root cause so we could develop a way to protect the phones. Our solution is relatively simple, but the key to making it work so well is knowing which frequencies and ranges are causing damage and making sure you dampen them enough to protect the phone.

Our vibration damper was launched in 2020 and we haven’t had a single issue since. We also have an article about our solution here on our Instagram Quad Lock page

Are there any good Quad Lock tips/tricks that you see from customers who aren’t using their full potential?

In fact, I’m sometimes surprised at how clever some of our customers are at finding ways to use our products that we hadn’t even thought of. I love to see it when people go the extra mile and build complete custom parts to incorporate our brackets into their projects.

Many of our customers don’t realize how customizable Quad Lock products are these days. With the introduction of Quad Lock 360 you can build your mount to suit your needs. 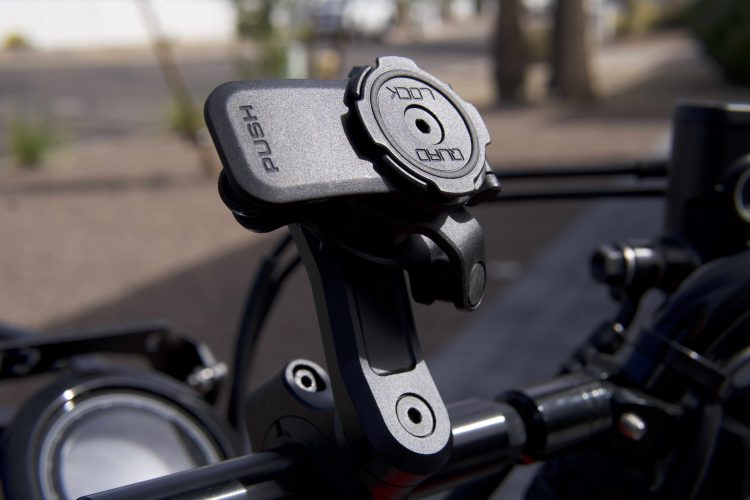 I’ve put together a short video in my backyard on the three different mounts I use now, and how easily they initially mount on the bike, if you’re unfamiliar with the product, this will tell you will show how easy the setup is to set up and use.

Overall I’m very impressed using these, it’s a very simple idea that works exceptionally well, keeps the phone secure when mounted and driven, quickly releases your phone when you need it, to take a photo or when you leave the bike for a while. Does this mean that I will get rid of my GPS? Not at all, but it now means I have another navigation option at my fingertips, not in my pocket, and a quick way to take a snapshot when I don’t want to use my big camera.

If you would like to know more about your potential uses you can sign up for a mailing list at www.quadlockcase.net They now have a ridiculous variety of mounts as it is a modular system and fits any five different handlebar sizes: 7/8″, 1′, 1-1/8″, 1 1/4″ and 1 3/8″.

The 9 best cycling bibs for every cyclist in 2022

Rider Rumblings: Saskatchewan defense puts on a show against Hamilton