In an hour, we counted a biker every two minutes brazenly jumping a red light at Buckingham Palace

Red light rats! No wonder cyclists are facing a crackdown: In just an hour last week, we counted a cyclist every two minutes brazenly jumping a red light outside Buckingham Palace

By Craig Hibbert and Sam Merriman for the Sunday Mail

Rogue cyclists are blatantly putting pedestrians at risk as they jump a red light outside Buckingham Palace almost every two minutes, a Mail on Sunday investigation has revealed.

During the rush hour alone – between 7am and 8am – 26 cyclists ignored traffic lights and continued with blatant disregard for people crossing.

Another 22 of them did the same within an hour as families and children on summer school holidays began to gather outside the Palace gates last Wednesday.

Many cyclists were not wearing helmets as they rode along the busy road.

It emerged last week that cyclists could be forced to have number plates, insurance and obey speed limits as part of a sweeping shake-up to traffic rules.

Almost 10 million people in England cycle every week for leisure, health or work and UK roads have seen a bicycle boom as more and more people hit the road.

Cyclists caught jumping a red light by police face a fixed £30 fine, but enforcement of the legislation has declined as it has increased for motorists.

And government ministers increasingly believe cyclists should be made to follow the same rules as drivers, with identifiable markings required on their bikes.

Transport Secretary Grant Shapps told the Daily Mail: ‘I suggest there is a review of insurance and how you actually track cyclists who break the law.’ [via identifiable markings].’

Mr Shapps added that he saw ‘no reason why cyclists should break the rules of the road and be able to get away with it’. 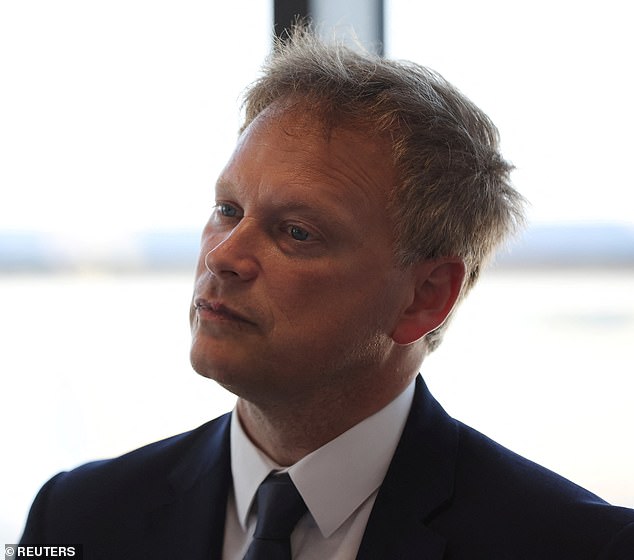 But he has since said he is “not drawn to the bureaucracy” of bicycle license plates.

The move would be part of a wider effort to crack down on aggressive cyclists, which would also see the creation of a new offense of death by dangerous cycling.

Last year an illegal immigrant was jailed for mowing down a hospital worker after running a red light in east London.

Albanian Ermir Loka was jailed for two years for hitting 72-year-old Peter McCombie at 15mph as he was returning home from the Royal London Hospital in Whitechapel.

Instead of apologizing to his victim, Loka, 23, pointed to his damaged bike and said “look what you’ve done” before fleeing the scene.

The court heard that Loka fled because he feared deportation.

In March 2017, a hedge fund executive was hit by a cyclist on a zebra crossing, leaving him with life-altering brain damage.

Gary Ibbott, 54, was forced to resign from his six-figure finance job due to injuries he suffered after courier Niall Morgan, 29, rammed him at Piccadilly in London as he crossed a pedestrian crossing during rush hour.