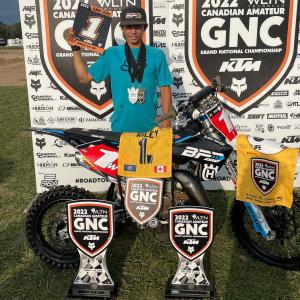 Jayden Riley of Red Deer, Alta., has been chosen to represent Canada and ride Junior MX 85 CLASS in Finland

Super excited to represent Canada in the 85cc class. I can’t wait to ride on European soil and represent to the best of my abilities.

CALGARY, ALBERTA, CANADA, August 20, 2022 /EINPresswire.com/ — Jayden Riley, of Red Deer, Alberta, Canada, is traveling to Finland to represent Canada at the 2022 Junior Motocross World Championshipand will take place from August 26-28 at the Lavanko Circuit in Finland, in the famous motocross town of Vantaa.

Fueled by Verge (FbV), a foundation committed to the adoption of digital currency by raising awareness and educating on blockchain technology and Verge Currencythrough athletes around the world, is proud to congratulate Jayden on this incredible achievement.

Jayden recently qualified on May 29, 2022 for the Loretta Lynn Amateur National Championship, via the Loretta Lynn NW Regional Qualifier at Washougal MX Park in Washington. Jayden had to make it to qualifying twice, where he had to finish first in his class each time. Jayden then raced in 2 separate classes at the National Amateur Championship where he finished P20 and P26. Moments after that championship ended, Jayden headed back up North to race in the Walton TransCan Canadian Championship, where he became Champion of the 85cc category (12-16). He also reached the podium, 2nd place overall in the Supermini class.

Jayden has been racing since 2019 and had huge goals and aspirations from the start. Like most dedicated motocross athletes, he has been trying to qualify for the Loretta Lynn Amateur National Championship for many years. Jayden travels to events and competitions across Canada and the United States. He currently sits at the top of his class in Canada, for amateur motocross.

“We are honored for Carl at Motopark to have asked Jayden to come, and we are thrilled with the adventure. These are times that we cannot pass up, and we are happy that Jayden has the chance to represent the Canada and for being an ambassador, and representing Powered by Verge and Verge Currency on such an amazing platform. Thank you to all of our supporters.”
—Cody and Christine Riley – Parents of Jayden Riley

Having Jayden on the Vergecurrency and Fueled by Verge motocross team is special for many reasons. He was one of the first 2 motocross athletes, in the history of the sport, to represent a digital currency (cryptocurrency) in the Monster Energy AMA National Amateur Motocross Championship, and will be the first motocross athlete in the world to represent a digital currency. Currency at the Junior Motocross World Championship
Jayden helps raise awareness of the decentralized, open-source, community-driven digital currency “Verge Currency, denoted by the ticker $XVG. With Jayden branding his bike and gear with Fueled by Verge, it allows him to welcome questions from his peers and community around $XV. Jayden is equipped with the answers that will bring the next generation of currency to users around the world. Powered by Verge is a non-profit foundation and, through partners, helps athletes to go to their respective competitions.

The 2022 Junior Motocross World Championship will be held August 26-28 at the Lavanko track in Finland, in the famous motocross town of Vantaa.

The former MXGP host club – Vantaa Motor Club – last hosted the Junior World Championships in 2006, when the current super stars were on their way to their professional careers. Names like Alessandro Lupino, Ken Roczen, Eli Tomac, Glenn Goldenhoff and many more were battling for the title in Finland.

The Vantaa Lavanko Track is located just 20 kilometers from Helsinki city center and next to Helsinki-Vantaa International Airport (HEL).

Jayden Riley is currently sponsored by:


EIN Presswire’s priority is source transparency. We don’t allow opaque clients and our editors try to be careful not to weed out false and misleading content. As a user, if you see something we missed, please bring it to our attention. Your help is welcome. EIN Presswire, Everyone’s Internet News Presswire™, attempts to define some of the boundaries that are reasonable in today’s world. Please see our editorial guidelines for more information.