It’s bad enough when you choose to park your vehicle in the emergency lane without an emergency actually occurring, but when you choose to stand in the road and then get upset when a motorist who passes honks at you to warn you of the direct path of traffic, to the point of showing his displeasure with a swinging gesture of his arm, it goes to another level.

This is precisely what happened earlier today on Jalan Temiag-Pantai in Negeri Sembilan, which of course remains a stretch of road for photo ops, without people continuing to park their vehicles in the lane. emergency for those who do. -the-gram moments.

This particular scenario, captured on dashcam footage, unfolds when a motorist traveling along the federal highway approaches where a group of motorcycles are parked in the emergency lane. All the runners, except one, came out of the tarmac well. The motorist continues to honk to warn the driver, who is standing not in the emergency lane but on the road, and the guy gets annoyed at being honked – the clip shows him swinging with his right arm, carrying something. 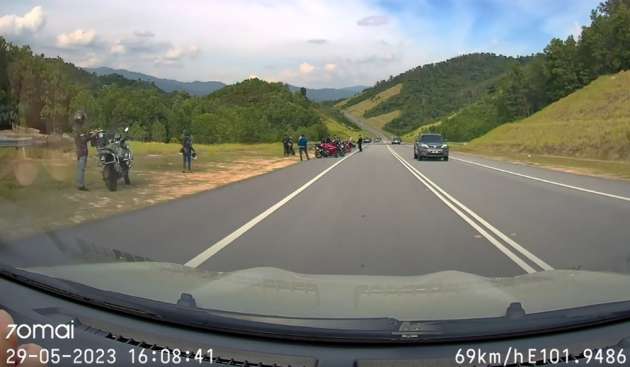 Look, you’re already not supposed to be parked in the emergency lane, which isn’t allowed unless your vehicle is broken down, but staying on the road and getting upset in such a way when are you being notified? You need to learn to control these emotions and be more civic.

Cops have already declared the activity illegal and earlier this year issued 48 summons to motorists to park in the emergency lane for rallies and photo shoots. Authorities said there were no restrictions on activities as long as they did not impede traffic and pose no danger to anyone.

“It’s ok to take pictures, but don’t park your car in the emergency lane and disrupt traffic and put others at risk,” said the Negeri police chief. Sembilan, Datuk Mohamad Mat Yusop, in February. The point is that there is plenty of flat ground – notably in today’s incident – away from the road where vehicles and bikes can be placed, and for people to stand on safely. But that wouldn’t make for great photos, would it now?

Ceat; the exclusive tire sponsor for RE at Rider Mania